With its towing capacity of up to 60,000kg / 132,000 pounds, the TowFLEXX TF5 is a true heavyweight and unique in its class. Perfect for Super-Midsize Jets, Military Jets and Helicopters with Single- and Twin-Tires. However, the adjustable nose wheel adapters allow small aircraft to be moved. This makes the TF5 an absolute all-rounder, which is why it is used by FBOs, MROs, corporate flight departments, private owners and military personnel all over the world.

No Towbar, no Damages

Our Aircraft Tugs belong to the Category “Towbarless Tugs”. And there’s a good reason for that, because safety comes first. With our unique 360° technology, the nose wheel is picked up on a turntable, allowing the tug to move freely around the nose wheel without twisting it.

The newNPS (Nosewheel Protection System) offers even more safety and comfort during the tow. Learn more about the NPS HERE!

It’s a very simple but reasonable calculation: if you have more hangar space, you can accommodate more aircraft – and that’s exactly what TowFLEXX aircraft tugs can do! Due to the very flat design and the unique 360° technology, the entire hangar space can be utilized with the TF5.

Aircraft can be parked right up against the wall, or all the way into the corner, as the TF5 requires very little space to maneuver.

Features of the TF5

Front compartment with access to the charger and main key switch. The compartment can be locked to prevent unauthorized access. In addition, a digital display (MDI) and interfaces for various additional systems and analysis tools are located here. 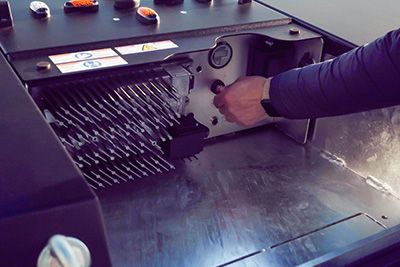 Two eye bolts allow the TF5 to be additionally secured during transport, or to be towed with in an emergency situation.

There are a total of 6 LED headlights on the TF5, which illuminate the track in the direction of travel, as well as providing optimum visibility behind the tug and on the nose wheel. If necessary, these can be switched off via the radio remote control (for example, when night vision equipment is in use). 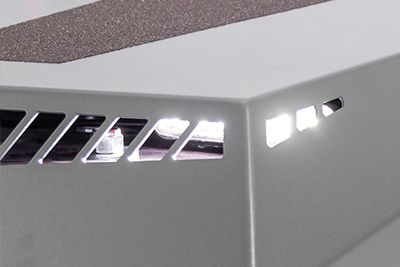 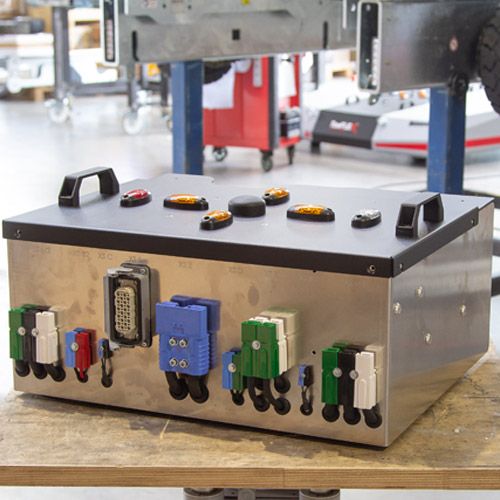 LED indicator and status lights show the user where the TF5 is moving and if it has an active connection. 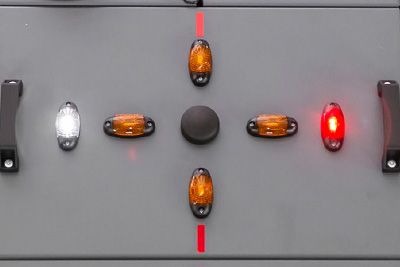 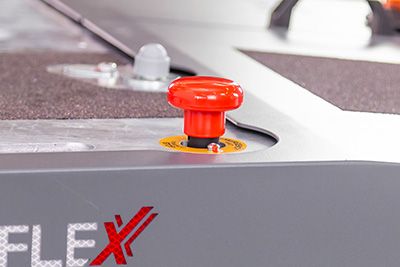 360° turntable – with patented mount and turntable motor adjustable nose wheel adapter, which can be adjusted to many wheel sizes. The turntable has different modes, together with the NPS (Nosewheel Protection System) it is controlled fully automatically and always keeps the nose wheel in the direction of travel. 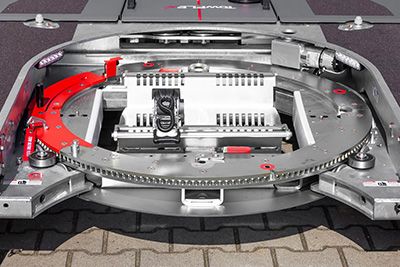 Full rubber tires provide optimum traction that some of our competitors have trouble with. In addition, the operator does not have to worry about flat tires. 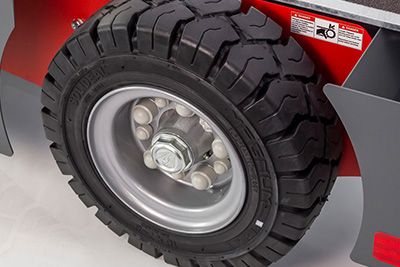 The TF5 was developed to avoid costly downtimes. In the process, a central control unit was designed in which all electronic components and computers come together. In other words, this “eCube” not only protects the components inside, but can also be exchanged and replaced with a new eCube in a matter of minutes in the event of a malfunction.

In addition, the eCube also houses the Charger for the tug, the charger for a spare battery of the radio remote control, a data logger, which can be helpful for error analysis, a display over which hours of operation and possible error codes are displayed, the central key switch to put the unit into operation and further interfaces for programming etc.

Release the magnetic brake during lifting and lowering (standard setting) or lock it, for operations on uneven surfaces.

The TowFLEXX TF5 is operated via a multifunction remote control. In the default configuration, it connects via radio, but if the supplied backup cable is connected between the remote control and the tug, any radio transmissions are disabled, which can be quite important for some locations.

Overall, the TF5’s turntable motor offers unparalleled flexibility that no other competitor can match. This technology allows aircraft to be parked far into the corner or directly in front of the wall.

The maximum protection for the nose gear

The optional TowFLEXX NPS (Nosegear Protection System) makes towing with the TF5 even easier! Although it was already possible on previous TF5 models to always align the nose wheel in the direction of travel, but this had to be done manually by the user via the radio remote control.

The NPS takes over this operation and compensates the tug’s movements fully automatically during the towing process. All that is needed is a sensor that is attached within seconds using a suction cup approved for aircraft paint.

In order to complete the towing process and lower the aircraft, the sensor must be removed again. This safety mechanism will prevent this being forgotten on the aircraft.

Pick up an aircraft with the TF5

If manufacturers state in their product descriptions that their products are easy to use, this certainly does not mean that it really is the case. Fortunately, this is not a problem we have to struggle with and we would like to present this to our customers and interested parties.

Of course such a demonstration works best live and on site, but in this short training video a operation with the TF5 on the aircraft is well documented.

By the way, it does not matter if the aircraft has single or twin tires, both can be operated beautifully with the TF5!

Aircraft to be towed with the TF5

This is only an extract

This excerpt shows a variety of aircraft currently being towed with the TowFLEXX TF5. This list is not complete and is being updated constantly and includes mainly aircraft of higher weight classes. However, it is also possible to maneuver smaller aircraft such as Piper PA32, Daher TBM or Beechcraft King Air with this tug. Basically, almost all aircraft up to 60,000 kilograms can be operated, as long as ground clearance permits.